In order to honor my debts and life-long gratitude to The University of Chicago Press and its astonishing editors, artists, and professionals, I have restricted the discussion of this corpus mysticum or “secret body” in the present section to the Chicago corpus, that is, to those technical works of scholarship published by the Press. Other books not published by Chicago, which are also key components of the body of work, will be treated under “The Public Humanities.” Numerous other works, including co-edited volumes and technical and popular essays, are not treated here, as I fear they would overload the presentation and distract from what I most want to say at the moment about the whole rather than the parts.

The first half of my writing career (roughly, 1990-2005) includes Kali’s Child (1995), Roads of Excess (2001) and The Serpent’s Gift (2007). It homes in on subjects like the queer sexualities of Jesus, the public controversies of the Kali’s Child affair in both India and the U.S., the apophatic and mystical origins of critical theory and comparativism in the study of religion, the importance of a long-standing “academic gnosticism” in the field (in which theory is inspired by the erotic and mystical experiences of the scholars themselves), and the immediate and overwhelming importance of the American counterculture in catalyzing and shaping the comparative study of religion in the 1960s, 70s, 80s and beyond.

Very briefly, it is my own position that the current received narrative about the comparative study of religion (that it is fundamentally an expression of

Protestant missionizing theology and Western colonialism from the nineteenth century) is true enough for the nineteenth and early twentieth centuries and must be engaged as such, but that this same narrative is fundamentally mistaken and historically myopic if extended past that time period. The deeper historical origins lie in mystical thought and experience that reach back at least as far as Neoplatonism. And the closer historical origins lie in the ecstatic states and enthusiasms of the counterculture of the 1960s and 70s. My mantra has thus become: “It’s not about colonialism. It’s about counterculture.” It’s also not all negative. It is often quite positive, cosmopolitan, progressive, and sometimes even cosmic. 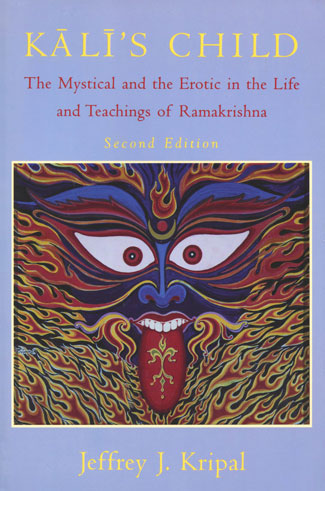 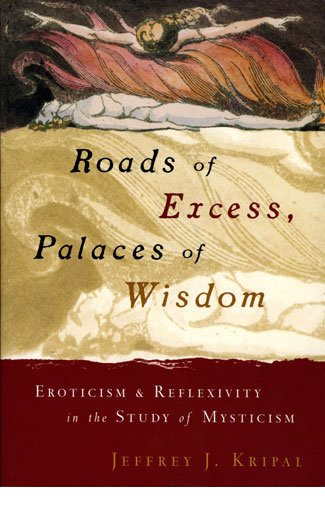 This book takes the ideas and methods of Kali’s Child and applies them to both male mysticisms from around the world (Christian, Islamic, Hindu, and Jewish) and to modern scholars of mysticism.  The title comes from a “Proverb of Hell” of the English poet William Blake, who wrote in The Marriage of Heaven and Hell that, “The road of excess leads to the palace of wisdom.”  In a similar spirit, I reflect on how the modern study of mysticism has often been inspired by the excessive states and mystical experiences of the scholars themselves.  More specifically, I suggest that these “roads of excess” are often marked by erotic engagements with text and tradition that carry within themselves important theoretical insights into both the historical mystics and our own critical engagements with their texts.  This book also includes five “secret talk” sections, essentially a spiritual autobiography, in which I describe and psychoanalyze my own mystical experiences. 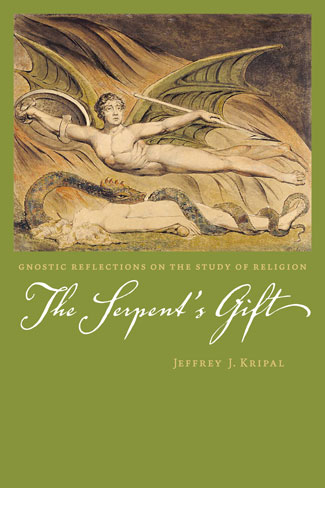 This book takes the ideas and methods of Roads of Excess and “performs” them in a more poetic and somewhat bolder mode. I begin by observing that as recent domestic and geopolitical events have become increasingly dominated by intolerant forms of religious thought and action, the critical study of religion continues to find itself largely ignored in the public square. Caught between those who assert that its principle purpose is to reflect the perspectives of those who believe (the model of representation and benevolent faith) and those who assert that its only proper place is to expose these same worldviews as deceptive social and economic mechanisms of power (the model of reductionism and reason), the discipline has generally failed to find a truly audible voice. Rejecting both of these modes of knowing as insufficient to the radical subject that is religion, I offer here another possibility, that of the serpent’s gift. Such a gift hisses a form of gnosis, that is, a deeply critical approach to religion that is at the same time profoundly engaged with the altered states of consciousness and energy that are naively literalized by the proponents of faith and too quickly dismissed by the proponents of pure reason. Beware of this book. It bites.

The second half of my writing career (roughly, 2005 to the present) includes Esalen (2007), Authors of the Impossible (2010), Mutants and Mystics (2011) and Secret Body (2017). This cycle hones in on subjects like the history of the California human potential movement, the irreducible nature of mind beyond body and brain, the rise of the paranormal in the intellectual history of the West (particularly around Cambridge, Harvard, and Duke), the numinous dimensions of horror, the Cold War distortions, racial complexities, and finally religious

nature of the UFO phenomenon of the second half of the twentieth century, and a new emergent mythology or “Super Story” involving what I have called the new “biological gods.” The latter are powerful presences in the environment that are now being read, including and especially by professional scientists who have encountered them, as actual invisible “species” instead of as traditional angels, demons or gods. 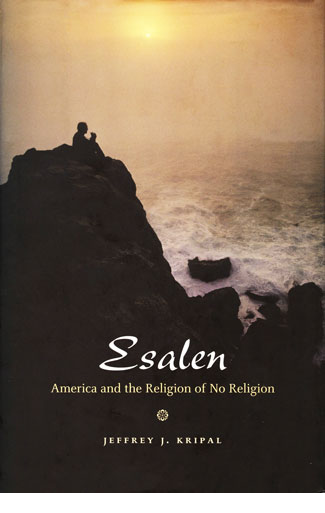 This is a historical study of the American human potential movement: its historical roots in Emerson’s Transcendentalism, Whitman’s ecstatic-erotic poetry, Wilhelm Reich’s orgone, Aldous Huxley’s writings on the perennial philosophy and psychedelic revelation, and early charismatic teachers like Gerald Heard, Alan Watts, and the Beat poets; its creation in the early 1960s in Big Sur and the Bay Area; its history of political and social activism, primarily via Soviet-American relations, in the 1970s and 80s; and its constant engagement with the history of mysticism, science and religion, psychical research, and Asian religions.

A deeply personal and eccentric note. As I neared the completion of this book, I found myself inexplicably fascinated with the X-Men comic books of my adolescence. Eventually, I located the source of my fascination. I realized that the evolutionary esotericism of Michael Murphy (originally inspired by the writings of the Indian philosopher-mystic Sri Aurobindo) on the West Coast resonated eerily with the evolutionary fantasy and fiction of the East Coast, as if the two very different cultural projects were mirroring one another. And, indeed, Esalen and the X-Men appeared at nearly the exact same time, in late 1962 and early 1963. What the comic books in New York imagined as a pure fantasy the vastly more sophisticated metaphysical movement around San Francisco located squarely in actual human experience and sought to practice, theorize, and create a community around. It was this strange insight that led to what would soon follow—a series of encounters, still on-going, with real-world mutants, the conception and writing of the Super Story trilogy, and a vision of an eventual School of the Superhumanities. This is my work in the future, realized or not in this little insignificant life. 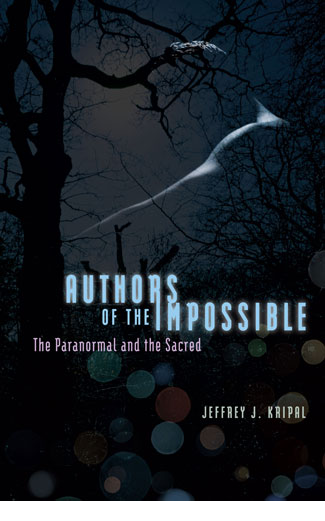 As I spoke to individuals and historical figures while researching Esalen, I kept encountering perfectly serious and perfectly sincere stories of anomalous experiences that I could not account for with my training. I wrote this book in order to call for a space in the study of religion for the anomalous, the psychical, the paranormal—the utterly and completely strange. I also suggest that at least some instances of these bizarre phenomena are amenable to humanistic inquiry in the sense that such experiences often display profound “semiotic” or “hermeneutical” dimensions. Put more simply, paranormal events often appear to reveal a world that is about meaning and not just matter, about words and not just numbers. Put differently again, the paranormal often works a lot like a text or a story in which one finds oneself caught and which one struggles, with great difficulty, to read. Hence my original subtitle for the book: “Reading the Paranormal Writing Us.” 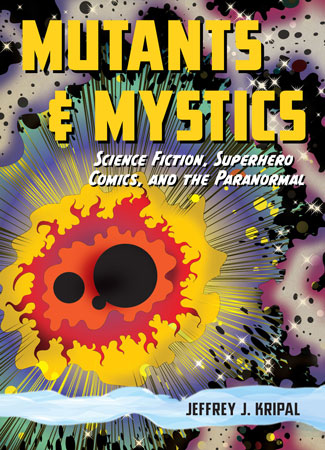 This is the book I originally thought I was writing when Authors of the Impossible came out of me. Whereas Authors focuses on the history of theorizing the paranormal over the last century and a half, Mutants and Mystics focuses on how the paranormal has helped generate the popular cultural genres of pulp fiction, science fiction, and superhero comics during that same period. More specifically, the book hones in on a number of prominent authors and artists (e.g., Alan Moore, Grant Morrison, Ray Palmer, Jack Kirby, Otto Binder, Alvin Schwartz, Philip K. Dick, Barry Windsor-Smith, and Whitley Strieber) and demonstrates how their creative processes were intimately linked to both the earlier histories of Western esotericism (particularly Rosicrucianism, Theosophy, Aleister Crowley, animal magnetism, and psychical research) and their own profound paranormal openings. The book ends with the observation that we cannot possibly acknowledge, much less understand, such events and genres with our present materialist assumptions; that such experiences are literally impossible without the positing of some sort of “soul,” “spirit,” or “Mind.” The Human is Two. 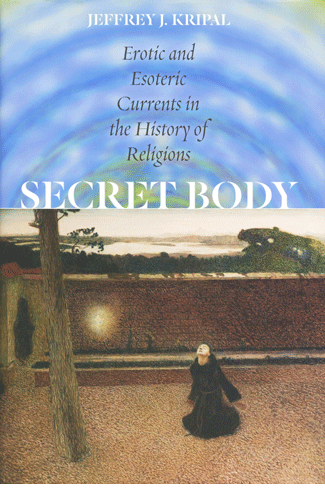 This book is at once a reader, a memoir and a manifesto. It crystallizes and clarifies a quarter century of thought and writing on two major complexes in the contemporary study of religion: the relationship between erotic expressions of mystical experience and male sexual orientation from Europe to India; and the rise of the paranormal in American culture and its contested interfaces with magic, miracle and modern science. In the process, I explain how my Chicago corpus came about, frankly answer my censors and critics, think out loud in the mirror of my private correspondence with readers and, finally, lay the foundation for a future theory of religion grounded in the cosmic nature of consciousness as such.

The cast of characters and stories include a boyhood spectral encounter near Buffalo Bill’s grave, a near-deadly adolescent case of anorexia and fasting healed by a monk-psychoanalyst, an occult spiritual electrocution in Calcutta, two national ban movements in India, a deep friendship with a human potential movement founder, public and private interactions with quantum theorists, neuroscientists, geneticists and psychiatrists convinced of the scientific importance of psi phenomena, and intimate conversations with a host of real-world “mutants,” from a Houston woman who finds herself dreaming the future after being struck by lightning to a science fiction writer traumatized and transformed by the beautiful horrors he has been writing about.